Learn how our services can help improve your dental health.

For most adults, dental implants are a suitable replacement for missing teeth.  They look and function like a regular tooth while providing comfort and confidence in your smile!

If your jaw bone is too soft or thin to keep a dental implant in place we can perform a grafting procedure to create new, strong bone that will be stable enough to support dental implants. 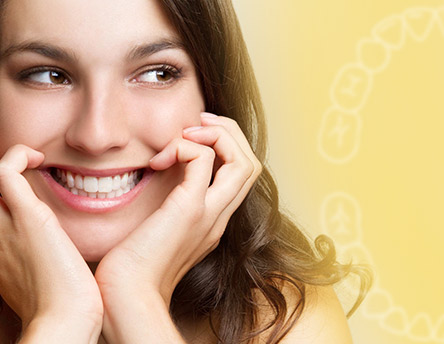 Dental implants are a great replacement option for missing teeth. Whether you are missing one or multiple teeth, dental implants can be utilized in many ways to give you the most functional and aesthetic result possible.

Although a periodontist’s ultimate goal is to keep teeth, sometimes it just isn’t possible. When an extraction is necessary, care is taken to provide the most gentle tooth removal as possible in an effort to preserve bone in the site and facilitate fast and uneventful healing.

Ridge preservation is a type of bone grafting procedure that occurs at the time of tooth removal in preparation for a dental implant. This procedure helps to minimize bone loss that naturally occurs during healing to provide adequate bone quantity for implant placement.

Ridge augmentation is a bone grafting procedure that is sometimes required prior to the placement of a dental implant when inadequate bone is present. The goal of this procedure is to regain bone width that may have been lost following tooth extraction.

A sinus augmentation is a bone grafting procedure that is sometimes necessary prior to or at the time of implant placement when replacing the top back teeth. Although it sounds invasive, it is a hugely predictable procedure with a success rate of over 95%.

We recently installed a Planmeca ProMax 3D CT scan that allows us to take a 3-D scan of your upper and lower jaws. While regular x-rays provide information on a 2-dimensional scale and are often distorted, this 3-D image allows for a near exact evaluation of your mouth and, therefore, a more accurate diagnosis and treatment plan. It provides crucial information in the implant-planning process.

Periodontal disease is a chronic infection around the teeth that occurs over a period of time. Usually, it is associated with tartar that accumulates below the gums and is impossible for the patient to remove on his or her own (it’s even difficult for us to remove!) However, once the tartar is present below the gum tissue, it acts like a splinter and the gums can become very swollen, irritated and may bleed during routine daily hygiene.

A lot of times, the bone that holds the teeth in place retreats down the tooth in an effort to escape from the tartar but, on the contrary, the overall support of the tooth is now compromised. If this disease process goes untreated, the involved teeth will eventually be lost.

Scaling and root planing (aka “a deep cleaning”) is a procedure that attempts to remove plaque and tartar deposits from below the gums in an effort to reduce or eliminate the red, puffy gums that are associated with gingivitis and periodontal disease. Local anesthetic is used to numb the areas of concern to improve patient comfort and achieve a better result. Sometimes, this treatment will achieve health and all periodontal pockets will be resolved. However, in more severe cases, a surgical procedure may be necessary to fully achieve a healthy mouth.

When bone loss occurs around teeth, it never occurs in a nice, smooth fashion. Typically it is a very irregular and jagged bony foundation that prevents the pockets from healing fully following the deep cleaning. The goal of osseous surgery is to eliminate the pockets by restoring a healthy bony foundation that allows for easier hygiene and maintenance.

Sometimes bone loss from periodontal disease occurs in a way in which it can be regenerated, or grown back. If this is possible, it is always Dr. Smith’s preference to grow bone back instead of taking it away!

The goal of this procedure is to increase the amount of tooth visible above the gums to give the dentist more tooth to work with for crown placement.

In addition to treating all forms of periodontal disease, Dr. Smith also specializes in cosmetic procedures to improve the appearance of your smile!

Patients who feel that their smile is “gummy,” have an uneven gum line, or whose gums have receded may benefit from the types of cosmetic procedures performed by Dr. Smith right here at Village Implant Dentistry & Periodontics! 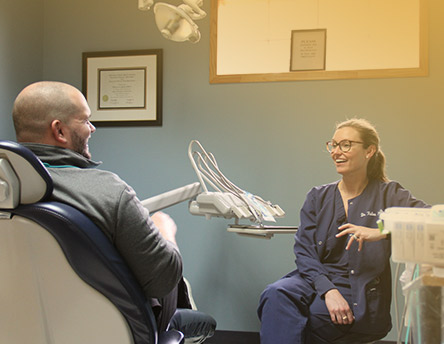 Gingival Recession occurs when the gum tissue “recedes” down the tooth in response to several possible causes. The recession may lead to thermal sensitivity, unaesthetic “long” teeth, and/or plaque retention. There are several ways of treating recession with differing root coverage procedures, all with very predictable and long lasting results. Be sure to ask Dr. Smith about all possible options!

A frenectomy is necessary when a frenum (a small muscle that attaches your lip to your gums) creates too much tension on your gum tissue. If not corrected, the excess tension can cause recession or even prevent proper tooth movement during orthodontics.

Esthetic Crown Lengthening is a surgical procedure that corrects a “Gummy Smile.” Usually the teeth are normal size, but they are hidden behind an excess amount of gum tissue. This procedure carefully removes the excess gum tissue to restore the teeth to normal size. The before and after of this procedure are life changing in a single appointment!

A gingivectomy may be necessary when excess gum tissue is present, making hygiene more difficult. A lot of times, the gum tissue grows in response to certain medications and worsens with plaque buildup.

We are happy to offer Periodontal Maintenance procedures to our patients!

We are pleased to offer both IV and oral sedation, as well as Nitrous Oxide gas to make your visit as comfortable as possible. Please, don’t hesitate to ask about these options at your next appointment! 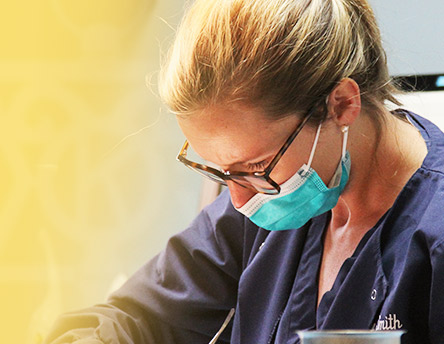